Anyone who has ever read a comic book or seen a superhero movie has lived vicariously through the characters, imagining what it would be like to have those kind of powers. How unstoppable would you be if you had Wolverine’s regenerative healing power, the Hulk’s brute strength, Spiderman’s climbing ability, or Batman’s armor? You might think wishing for such powers is as much an exercise in futility as it is in fantasy. Surprisingly, though, the technology requisite for many of these superhero abilities already exists, including those listed below.

Imagine having an exoskeleton, a la Iron Man, that endowed you with superhuman strength but was no bigger than a backpack. Believe it or not, Japanese research student Hideyuki Umehara has developed a prototype that does exactly that. The wearable “muscle suit,” as he calls it, is about 20 pounds and sits on the user’s back. It also has sleeves that allow for shoulder and elbow rotation. To show how it works, the inventor had a volunteer squat down, and Umehara placed an almost 90-pound sack in the volunteer’s arms. The wearer of the suit felt his hips move forward and legs straighten until he was standing with the sack without expending any energy.

One of the many powers Wolverine of the X-Men crew has is his regenerative healing ability, which is usually instantaneous and complete. While we’re not quite there yet, we do have rudimentary technology to produce a self-healing muscle. At Duke university last month, biomedical engineers grew living skeletal muscle that integrated into mice quickly and showed its ability to heal both inside an animal and inside the lab. 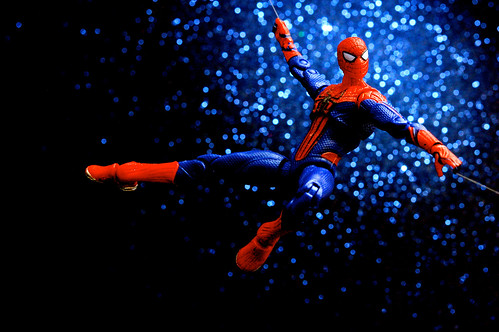 Wouldn’t it be so much easier next time you were running late for work just to scale the side of the building and pop in through the window to avoid your boss’s reprimands? Engineers at Cornell University have developed a device the size of your palm that uses water’s surface tension to create an adhesive bond that can stick to brick, wood, and glass. They’re currently working on applying the technology to shoes and gloves to enable users to climb up flat surfaces.

BATMAN, or Battlefield Air Targeting Man-Aided kNowledge is the Air Force’s nod to the Dark Knight. This uber-expensive suit is bulletproof, yet still light and agile enough to allow wearers to run and maneuver freely. Just like mythical Batman’s suit, this armor also comes with numerous visual displays. Here’s the best part, though–wearers have the option of repowering the suit’s gadgets with a Bat Hook that they can throw onto a power line to juice up their batteries.

Clearly, it’s no longer fantasy fiction for humans to have superhuman powers. Perhaps eventually gadgets like these will have us looking back at superheroes and laughing at their relatively unremarkable powers. With this kind of technology, the only question is whether you’ll use your newfound powers for good or evil.